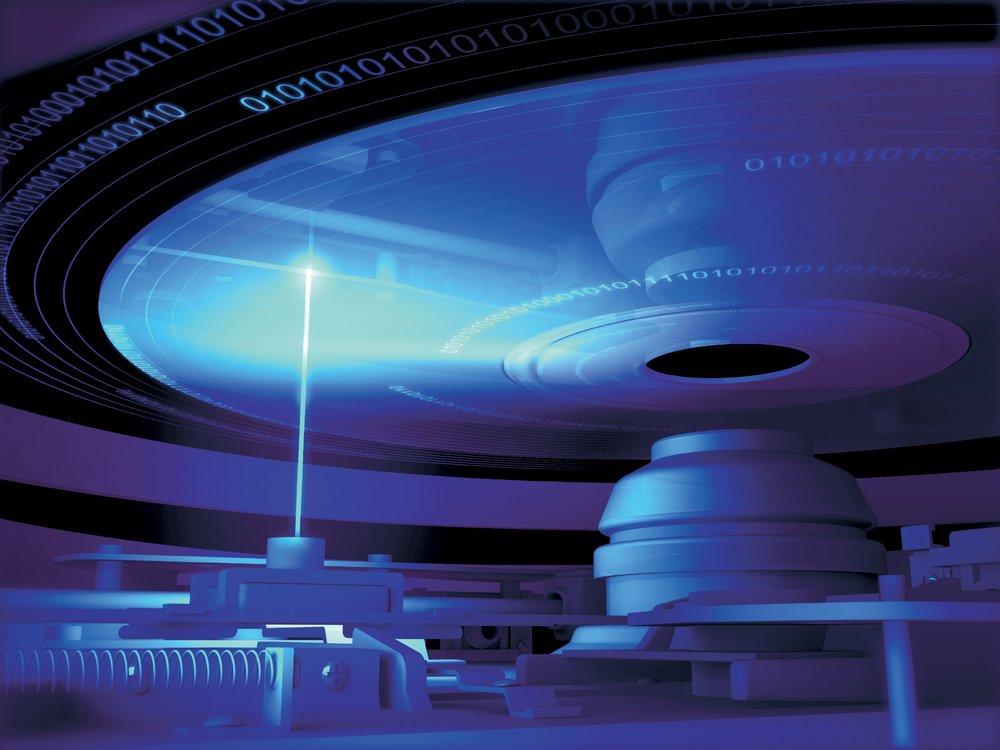 A supposed legendary technological evolution of the DVD, the future of optical entertainment. So where are they?

CDs were a breakthrough, at least in terms of storage. When CDs came out they held more data than hard disk drives of the time, but things evolve. CDs evolved into DVDs, which held nearly 5 GB vs the ~700 MB of CDs. CDs and DVDs are manufactured in slightly different ways, and are read with slightly different tech, but Blu-Rays are rather interesting.

CDs and DVDs use a red laser to read the data on the disc, however the amazing invention of the blue LED, allowed us to create Blu-Rays (hence their name). Most people would probably wonder why the color of a laser would make any difference, and here's the deal: essentially, different colors of light, have different wave lengths. This shorter wavelength, basically gives us more space on the surface of the disc. (Although, Blu-Ray discs are also manufactured differently than other discs, so you can't just add a blue laser and suddenly get more capacity on a DVD.)

Now that the nerdiness is out of the way, lets get to it: why have Blu-Rays failed? Now I can't definiitively say that Blu-Rays have failed, as they are still commonly sold, and in fact, I believe most consoles use Blu-Ray discs for their games. But realistically, when was the last time you purchased a Blu-Ray disc? Sure, some of you may answer that you purchased a few, hell you might even have a whole movie collection on BD, but compare that to the amount of DVDs you've purchased in your life. Does your computer have a BD drive? Or even a burner? For most people, the answer is no, yet I guarantee if your computer has a disc drive, it can read DVDs, and probably even write them.

And, I'm not saying that BD Readers/Burners are uncommon, they're pretty easy to get, yet they are still quite expensive (relatively speaking).

I asked some friends, why they thought BDs were as expensive as they are. I expected the majority of answers to be something along the lines of "because they're better", however I was surprised to find that the general consensus, was that they were probably more expensive because they were made tougher/of higher quality. And thinking back to some BDs I have, I suppose I do remember them feeling a bit tougher than DVDs (I did mention earlier that they were manufactured differently).

While the responses were enjoyable, and I believe there is certainly truth to them, I still think there is more to the story. If you want to buy a 100 pack of CD-Rs right now, you can do so for 10-20 bucks if you wanted to do that 20 years ago, while not terribly expensive, still would have cost more than that. I think it's safe to say, that when something is new, it's usually more expensive now, than it will be once it catches on with the masses. Blu-Rays, in my opinion, never really had that breakthrough, but instead are hanging around in limbo, waiting on the sidelines as the entire optical storage market slowly dies off. Why? I remember hearing about how Betamax was actually of higher quality than VHS. Yet VHS still won the battle, because it was able to (among other things) get into American's homes much quicker and cheaper, and thus it was adopted as the home movie format. I feel Blu-Ray had a similar life. It was objectively better than DVD, but... everyone already has DVDs, and likes them. They get the job done, and they're easy to acquire. Basically every computer supports them, and everyone recognizes them. So when people see Blu-Ray, why wouldn't they just think: "so, it's just a fancier DVD"? From a glance, CDs, DVDs, and Blu-Rays, look identical. Now, in terms of being the same form factor, I think that's good, but at the same time general consumers don't really care I think. It's not like cassette vs CD, because even though CDs were more expensive, and different, they were leagues better in terms of quality. Have I ever seen a full length 4k movie on DVD? No. But I don't even have a 4k TV, and I don't see anything wrong with DVDs. (They are digital after all.)

I firmly believe, that if Blu-Rays had been more widely adopted by consumers, that they would be as common as DVDs and CDs, AND cost less. If more people are manufacturing more BDs, and more people are buying them, and there's more competition, then surely the prices would have gone down. Sure DVDs most likely would have remained the cheaper option, but they wouldn't be so far off like they are now.

At the end of the day, I'm just a guy who doesn't know what he's talking about, but I think it's a shame that Blu-Rays never truly caught on like they should have.