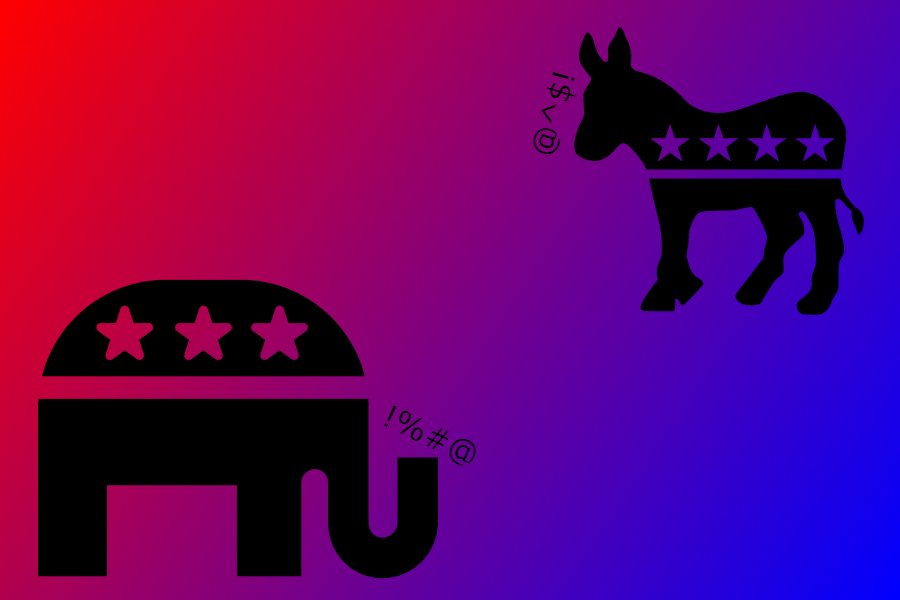 Why political party affiliation is stupid.

Here we are, my first political post. Signs of what is to come? I don't know. But this is something I've been thinking about for a while now.

People will often ask what political party you affiliate with, and as soon as they ask the question you may be uncomfortable. You know that depending on how you answer, the outcome of the conversation could be radically different. While many normal people will simply accept your answer, there are concerning individuals who will suddenly become highly irrational at the mere mention of association with the opposite party.

I'm going to be frank with this one - while these ideas in my head originally started out as calm, normal thoughts - over the past few years, and especially in recent times, I have gotten angrier and angrier about this.

To those reading this, I want to say that as a 19 year old with very little real world experience, I firmly believe I am better at civil [political] discussion, and a more rational individual than most adults I have talked with in my life. Though I have not talked politically with many adults outside of my family, so perhaps my family just has bad manners or something.

Now, obviously that's not inherently wrong of people, there's a reason we pick sides after all. However, most Americans don't lean all the way to one side, they have a mix of beliefs that land in both areas. People can't be defined in such a black and white manner (despite how much simpler life would be if they could...). Another way to describe it is with everyone's favorite word; political beliefs are on a spectrum!

I've avoided the question long enough, and while I think it does a disservice to my post, I hope I at least got everyone to read this far. To make life easier so I don't have to go into a rant (like this one) everytime someone asks about politics, I usually just tell them I'm Republican. And in many ways I am, but at the same time I don't know how true it is. There are many things where I take a conservative stance, and many where I take a liberal stance, but as of yet, I don't have an easy way to quantify which side I truly lean towards. But why the hell does it matter? WHO CARES? Why can't people just accept that they may disagree on something, and they may not, and continue about their lives.

If someone asks me whether or not I approve of things like gay marriage - well yeah? Not because I think there's anything inherently special with being gay or straight, but because I don't care who gets married to who. It's your life, live it how you want to, whether I understand it or not. My personal belief is that gay/straight/bisexual and all the other various types of people should just be considered people, why diffentiate between them? But at the same time, if somebody disagrees with me, I don't care. That's their personal belief that they are entitled to, whether I like it or not. Will I let you know that I disagree with you? Maybe, depending on the situation, but I won't tell you that your viewpoint is any less valid than mine.

To take this to an extreme, let's say someone tells me they think black people are inferior to white people. I 100% DO NOT, nor will I ever agree with that kind of concept, or any other racist ideologies. However, you are allowed to believe that. It's not against the law. If you harass black people, or mis-treat them in the workplace, or any number of other actions based on the color of their skin, then yes, that is not okay and most likely illegal, and you are at the mercy of the law (and public opinion) at that point. But if you're just some closeted racist, then while I don't understand you, I still support your right to think that way.

I know that last part is going to be controversial, especially as I tend to not be able to properly express my feelings with words (I have ADHD), and often cause people to misunderstand/misinterpret me, so I'll end this section off with one of my favorite quotes of all time. "I do not agree with what you have to say, but I'll defend to the death your right to say it." -Voltaire

Alright, but in all fairness I have sidetracked somewhat, I just needed to get these things out there. The main point of this post, is to pose the question; what is the point of attaching a label to yourself and others, based on political and world views? This could also lead into a future discussion about labels in society as a whole, as we've seen time and time again the issues that come from labelling people.

Despite what I just said about labelling people, allow me to now label people :). While I could be wrong about this, I've observed that most of the people I hang out with (friends) tend to lean more liberal than conservative. And while some of my friends clearly are not ready for civil, adult discussion of certain topics, most of them are. And the few that I've had the pleasure of talking with, were honestly pretty fun at times. My family (referring to parents, grandparents, and aunts and uncles) apparently made an agreement to never discuss politics with each other a while ago (when I was very young), and it shows. The few times political discussion has somehow crept its way into the family, the results were in all cases, negative. Most times either having varitable shouting matches, or having one side continually butting in not allowing the other side to speak. With my fellow recently-out-of-highschool friends? Never happened. And before some brainlet goes "well uh, those are friends, of course you guys would be nice to each other", shouldn't family be even nicer to each other? It's a bad argument that I don't think anyone would actually make, but just in case...

A few hours ago, I filled in my state's voter pamphlet (for the local state government), and noticed that at the end, while I had voted mostly for people who were claiming to be Republican, I had also voted for one "independent", and one or two Democrats. I intentionally tried to read about each candidate without looking at what party affiliation they claimed to be (not to mention many of them saying they were bipartisan or nonpartisan and trying to reach out to all people regardless of side), and I feel better for it. Because by default, whenever I see "prefers Republican" I'm going to be biased towards them, but a surface level label won't tell me if they represent what I believe, nor will it be any real indication of what they will do in their position of power (however minimal it may be).

If you're similar to me in age group, imagine showing a candidate to your parents who is of the opposite political party to them, but without disclosing that information. Let's say they read through their claims/statements and say "yeah they sound good" or at the very least "well, they seem like they could be a good choice". Then you reveal to them the little bit of info you hid from them. While this may not hold true for everyone, I'd bet there's a good chance they would be shocked and would no longer have the same opinion. But nothing changed, that candidate is still the same candidate they were before, and their claims/statements haven't changed. The only thing that changed was you not realizing which label they gave themselves. Suddenly thinking less of them? Now that doesn't quite seem fair does it.

It's pretty late now, and I'm tired, but I hope I got my point(s) across. And if you read my whole post and think I'm full of it, and that nothing I said is logical. Awesome! As previously mentioned, I don't care, because you have that right. In fact I encourage it. I don't necessarily want to be in an echo chamber of people who agree with me. If you disagree, then I'd love to hear your feedback even more than someone who agrees. So please, if you have any compliments, criticisms, disagreements, or ideas for what we can do as a country - as a people, to leave your feedback in the comments section below. My only real request, is that you just be at least somewhat civil about it. I'm open to new ways of thinking.